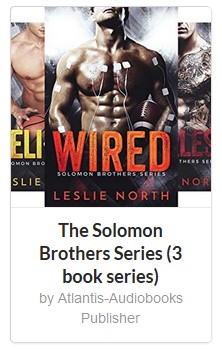 On Story Origin I requested: The Solomon Brothers Series (3 book series) and it only gave me a code for the first book so I can only give my thoughts on that book itself and not the 3 as it seemed like it was supposed to be. The name of the first book is Wired.

Was a nice short book with lots of information packed into it, without it feeling overwhelming. The story was quite interesting, leaves you wanting more.

Narrator did a great job on the character voices.

I received a free review copy of this book and am voluntarily leaving am honest review.

Star quarterback Marcus Kingston lives and breathes football. He's trusted his abilities and instincts to get him this far, but an injury last season nearly ended his career. When his coaches want him to wear biofeedback technology to analyze his game, Marcus thinks the idea is ridiculous. Plus, the mousy scientist behind the project knows nothing about sports, and she quickly gets under his skin. But with another QB waiting on the sidelines, Marcus can either agree to participate, or be benched - permanently. Scientist Clare Wynifred values intellect above most things. With her brain constantly working, she has little interest in her appearance and zero interest in sports. She never imagined her wearable tech being used to improve someone's game, but its success with the team could get her a military contract. Clare may be too late to save her brother, but her technology could save the lives of countless soldiers. She just has to make it work with the stubborn quarterback, and she'll be one step closer to her goal. Marcus and Clare butt heads at first, but their mutual attraction quickly grows. And yet, with everything to lose, it's easy to ignore that together they might be able to go the distance.