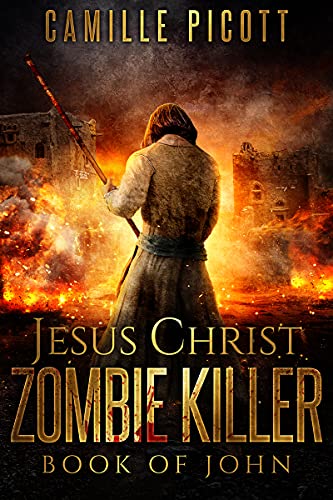 I will note that at first the chapters are quite confusing cause it changes characters quite often and you don't get a real feel for the parts they play and why this story is being told compared to others. In the middle it comes together and forms a more complete story which was awesome to see. I will say though that I wish the chapters were better laid out so we knew right away who was who.

This was given to me as an ARC but I loved the book and so I bought the book here as well. My review might be small spoilers, but nothing that should stand out and/or give the book away.

The novel talks about Herodias at the start and you get to know her as child and what is done to her and parts of the reads later on are quite sad. These main bits are in the first 5 chapters of the book. In chapters 6-8 you read about Phaselis (Phae for short) as a child and some things that you get to know will be useful to remember later on. You read about John in chapter 11 and get to know him and what he goes through. This is where things get spotty and can change chapter to chapter, which threw me for a bit. Each chapter slowly will reveal itself in the bigger picture of the plot

The characters got well defined in the book and you really start to pick who you like and who you hate. I loved reading the story and can't wait to see what might come next.

Here is a couple links: (never done this before so hope it works out)
Amazon.ca
Amazon.com
Amazon.co.uk

When the dead are resurrected, not even the blessed are safe. Can one peacemaker stop a necromantic war?

John the Baptist serves his people as a weapons master devoted to keeping the peace. The murder of his wife leaves him plagued with guilt and secretly dependent on herbs that help numb the pain of his loss. But when he realizes King Herod’s desire to conquer Egypt will lead to his people’s conscription, the world-weary warrior rises above his addiction to keep them safe.

Discovering to his horror that the king’s wily mistress is creating an undead army using necromancy, John realizes his people may be facing brutal extinction. And now his only option is to gather all the soldier-shepherds and make a stand against an unyielding legion of sacrilege…

Can the dedicated leader defeat an unstoppable horde before those he loves are wiped out?

Buy Book of John to end the bloody onslaught today!