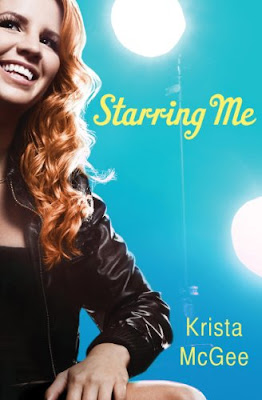 
This is the second book, the first one being First Date. I didn't know know prior to reading this, and you didn't need to read it to enjoy (/understand) reading this book.

This book is about a new hit tv show for teens who will star a male and female teen co-stars. Kara McKormick who wants to be a famous actress on TV, and is picked to be ing the top 10. It is also about Chad Beacon who won America’s Next Star and wants to branch out into acting, who already has the part. It features Addy (Kara's best friend and previous co-competitor in The Book of Love) and Jonathan (the presidents son) as well.

Kara McKormick is told she’s auditioning to star in a new teen variety show. But it’s what she isn’t told that could change her life.

The feisty New Yorker moves to sunny Orlando to participate in a month-long audition, where she’ll live with nine other contestants and an eccentric housemother. Kara knows that the show already has a big-time celebrity lined up for the co-host, but she doesn’t know who it is.

Chad Beacon quickly rose to fame after winning America’s Next Star, but he doesn’t want his entire career to be about singing. There is so much more he wants to do—like act. The new variety show sounds like the perfect next step for him, but his parents want him to have a co-star who shares his faith since they’ll be spending so much time together.

Acting is high on Kara’s priority list. But a relationship with God? Not so much. In fact, she’s tried to stay away from anything religious. But God is after Kara’s heart and He’s put people in her life who are showing her there’s far more to Christianity than rules and judgment.

And just when it seems that Kara’s going to have to give up her acting dream, God reveals that she may have a starring role after all—in a story so big only He could write it.