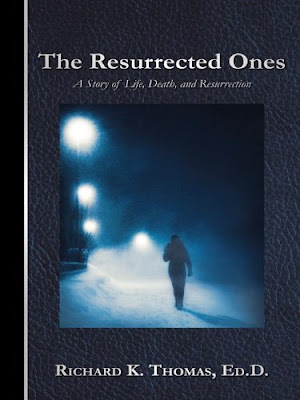 The Resurrected Ones
A Story of Life, Death, and Resurrection
By Richard K. Thomas, Ed.D.


I am going to talk about some small spoilers for chapters 1 to 5 but after that I am just going to leave it, as you will want to read it in full as this is a pretty nice book to read

This book has 13 Chapters each with a different story.

Chapter 1 (The Roman Soldier Dikmari)= Dikmari among 3 others are chasing 3 armed (with blades) and violent criminals. He has a chestnut stallion that he rides. He loves the outdoors, always has. He developed a love for horses at an early age. He spoke to Jesus and accept that God was his Father and has peace in his heart.

Chapter 2 (The Jewish Merchant’s Daughter Cheba= Cheba has a brother, and three sisters. She talks to Jesus who renews her love for God even more than she did.

Chapter 3 (The Old Greek Scholar Genova) = Genova, is having a harder time trying to see the detailed script work he is doing. "Yes, my eyesight is dimming" he thinks to himself. But at least he still can see. He was orphaned at an early age. He is in a prison cell.

Chapter 4 (The Resurrection and the Resurrected Ones) = This tells of the Crucifixion of Jesus and his rising again. Of how the saints also rose with him at the same time.

Chapter 5 (The First Mission) = This continues from the previous story. It talks of Dikmari, Cheba and Genova.


All stories are in, or around Jerusalem. They all have Jesus in them speaking to the main character(s).

The account you are about to read, is a story of the great providences of God. Providence is an interesting word. According to the Oxford University Dictionary, it means The protective care of God. This is a story that concerns aspects of Gods divine resources and of His protective care. Remember, Gods resources are limitless, so anything is possible!

The Scriptures tell us that there were certain saints who were resurrected from their graves, following the crucifixion of Christ. Is this strange or what? To say the least, this is a very unique and unusual event! There is nothing else like it, anywhere in the Scriptures. No specific explanations are given. The Bible says MANY came forth from their graves and were recognized by their friends when they returned to Jerusalem. What could be the reason many saints were brought forth from their graves? What could be the role and purpose of these special RESURRECTED ONES, in the Kingdom of God? After all, they have been amongst us now for over 2,000 years! There must be a reason why they are here. I have thought about this for some time now. Here is what I have concluded. First, I believe their role has been that of witnesses. Ye shall be My witnesses. Second, I believe their role has been to provide providential care.

Hopefully, this narrative will expand your concepts of the greatness of the divine resources that our gracious Creator uses, to bring about His plans and purposes in this man-made world of chaos and confusion. To say the least, I think your imagination will be challenged as you read the adventures of The Resurrected Ones!