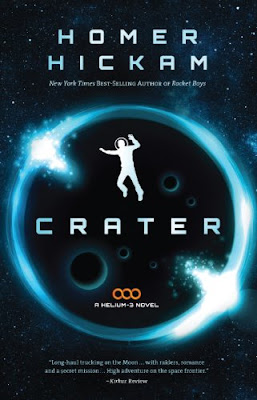 I love reading Science Fiction novels and this one seemed to be a neat idea. A colony of people living on the moon (Earth is over-populated). They all have a job up there doing something, and the suit colors match what they do. There are scragline pickers, who have grey uniforms. Scrapper, loader, shuttle operators, who have Navy blue uniforms. Explosive experts (called Devils) who have red uniforms. Mechanics (called Orangutans) who have Orange uniforms. Solar furnace operators (called Sun dancers) who have Yellow uniforms. Blue Bangers wears Navy blue coveralls with white stripes on the sleeves. Medics who have Green uniforms.

This story was really hard to get into at the beginning. After a few chapters it did pick up some and wasn't too bad. I have to say that i loved the illegal Gillie (who knows it is illegal). It has some very funny parts.
A mining colony on the moon. A teen sent on a deadly mission. And a secret bigger than two worlds.