Once Upon a Prince (#1 Royal Wedding) 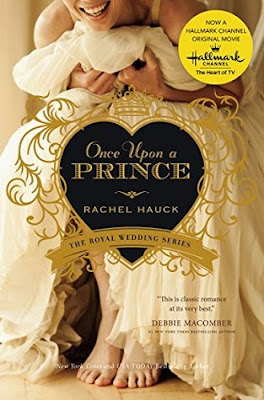 By Rachel Hauck
Published by Zondervan

Susanna is on the beach, hoping to hear a proposal from her military man that she has spent years waiting for. Instead, he says I found the right ring to give to my future fiance, but it is not her. "Right ring, wrong woman." In the just a few days, Susanna loses her fiance, and quits her job. She comes to realize he is right, they weren't meant to be, and she feels like a fool for waiting for so long for him.

This was a really interesting book. Especially for just when you just wanting to relax. I would recommend this book to all who like to read romance novels that are not graphic.

Once Upon a Prince, the first novel in the Royal Wedding series by bestselling author Rachel Hauck, treats you to a modern-day fairy tale.

Susanna Truitt never dreamed of a great romance or being treated like a princess---just to marry the man she has loved for twelve years. But life isn’t going according to plan. When her high-school-sweetheart-turned-Marine-officer breaks up instead of proposing, Susanna scrambles to rebuild her life.

The last thing Prince Nathaniel expects to find on his American holiday to St. Simon’s Island is the queen of his heart. A prince has duties, and his family’s tense political situation has chosen his bride for him. When Prince Nathaniel comes to Susanna’s aid under the fabled Lover’s Oak, he is blindsided by love.

Their lives are worlds apart. He’s a royal prince. She’s an ordinary girl. But everything changes when Susanna receives an invitation to Nathaniel’s coronation.
Posted by arayasunshine20 at 4:09 PM