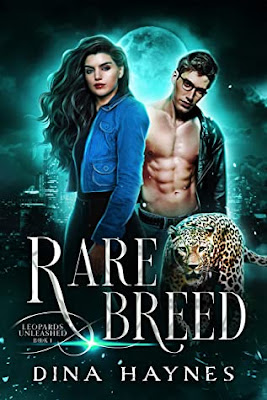 I loved this book with all its little twists. The book follows MacKenzie who goes by other names as all were's do. The book follows her perspective as she goes about her life. You get all your questions answered by the end of the book which was great since it is the first one.

The way it ended was also a nice touch to help lead into the next book which is told in MacKenzie's fathers prospective which with the little snippet you get at the end of this book shows that his book starts near or at the end of the last novel so that should be an interesting read as well.

I received an advance review copy for free, and I am leaving this review voluntarily, and I did not regret my choice in picking this one.

She was exiled at birth. He terrifies the other monsters. Can two outsider wereleopards overcome their differences and find their own way to love?

Los Angeles. MacKenzie is a loner by necessity, not choice. Hiding from the intolerance of the shifter world by living among humans, she’s terrified when she accidentally kills her date and blows her cover. Not only does she have to elude the LAPD, she’s on the run from the most feared bounty hunter in the were community.

Ramone Hernandes sees his own struggles reflected in his prey’s captivating eyes. So after tracking her down, he abandons his snatch-and-grab mission and instead attempts to clear her name. And the more time he spends with the alluring outcast, the stronger his urge to claim her as his chosen mate.

Confused by her attraction to the beast sent to take her in, MacKenzie must weigh her precarious state as a fugitive against the calls of her heart. And although he’s willing to do anything to protect her, Ramone’s failure to do his job threatens both their lives.

With their enemies aligning against them, can they survive long enough to heal their wounded hearts?