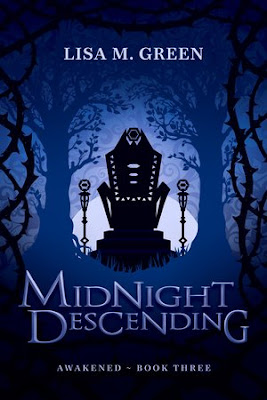 I read the first two book in this series and each one has been great in their own way.

This one is the final book of the series and I loved it. Each book in the series has ups and downs emotionally in them, and this one definitely showed that as well. The book answers all questions you might have had within the story line, and even more that wasn't even on your mind yet.

It shows Aurianna for the most part as does all the others, and within this book it also gives some perspective of Sigi in it.

There was one thing I had guessed at which turned true, but other parts were always surprising me with how they were and you get that ohhhh, kind of moment where you think that maybe you should have thought of that. The time bending in these novels plays a bigger role than you know as you read them.

With this book there is not much I would want to reveal since this whole thing could be considered a spoiler if I were to say anything, but this book and whole series has been a great read.

I received an advance review copy for free, and I am leaving this review voluntarily, and am very glad that I was allowed to do so. These are my own thoughts and words with no bias given.

BROKEN BY BETRAYAL. SURROUNDED BY DESTRUCTION. UNITED BY HOPE.

Aurianna must live with the consequences of her heartbreaking decisions in the aftermath of a betrayal too devastating to face.

The fate of Eresseia lies in the hands of those whose power is far greater than it seems, and whose leaders are not always what they appear to be. To protect the ones she loves, has she merely traded one monster for another?

Aurianna is now—irrevocably—a key player in a world that needs her as a leader, as a hero, and as the face for their emerging resistance movement.

With so many sides, choosing the wrong one could lead to the destruction of everything she has begun to think of as home.