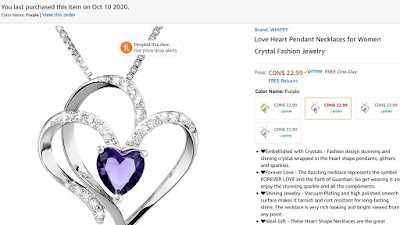 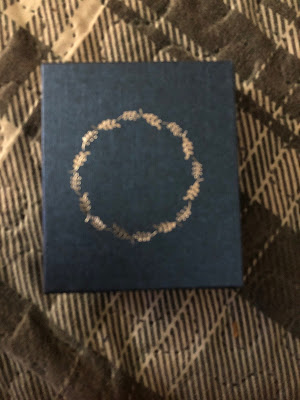 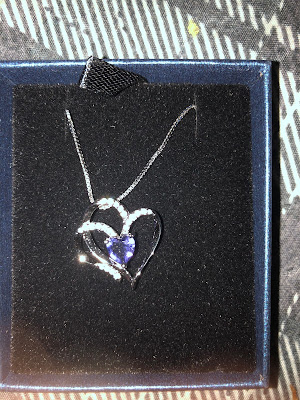 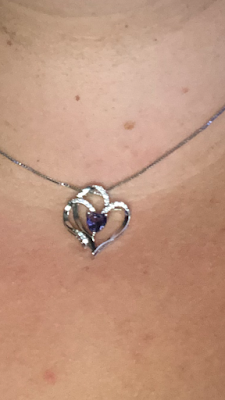 Pretty little necklace. Choker type size on adults but still fits. Cute design. This one was my favorite out of the designs cause I love purple and blue things. Very glad to have been able to get this necklace though will likely put the pendant on something with a longer chain since I am not into choker style necklaces.

Link to product on Amazon.ca

Posted by arayasunshine20 at 7:52 PM No comments: 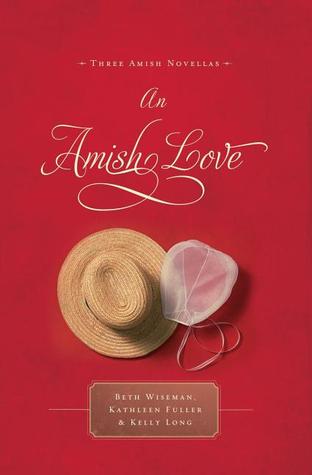 by Beth Wiseman, Kathleen Fuller, and Kelly Long There is a page in front of the book the tells what some Amish words are that are found in the book, they are in alphabetical order. While reading the book those words are italicized. There are 3 different stories in the book. Healing Hearts, A Marriage of the Heart, and What the Heart Says.

First Story - A Marriage of the Heart At the beginning a girl, Abigail Kauffman, is annoyed by a guy (by his casual dismissal of her beauty), Joseph Lambert, and to pay him back she says that "he . . . well . . . just made me feel a little uncomfortable with the way he was kissing me . . . and touching . . . and I . . ." Her father then says he will talk to him and they will be married, but that wasn't what she wanted, but her father said to dress in blue (which is the color for marrying). Now she will have to face his scorn.

This story, when read in full, warms the heart. It made me smile in a lot of different parts of the story. Great story that is well written.

Second Story - A Marriage of the Heart A blind woman, Ellie Chup, who was in an accident 5 years ago, has learned how to cope with being blind. She has a buisness going called Ellie's Jellies. The jelly is in full demand, one person even wants 4 cases made up. She believes no one will ever want her, since her last fiance didn't want to be with her.

Chris is a guy who blames Isaiah (Ellie's Cousin) for the accident that took his fiance's life (the same one from where Ellie was blinded. He moves away 5 years and finally comes back thinking he may be able to forgive Isaiah, until he finds out his sister is marrying him in 2 weeks.

This was a neat story to read, it captures your interest right from the start with the nightmare mentioned.

Third Story - What the Heart Says. This is about a middle-aged couple who has no children in their house no longer and sets out to rediscover the love that had brought them together before their children. They have been an upstanding members of the community

All in all good reads but i would say my favorite was the first story, then the second and last (but not least) third.

Romance is in the air, old-fashioned courtship is alive and well, and love is an eternal promise.

He left to find himself. She found her way without him. Now Levina and Naaman Lapp are together again, feeling miles apart. Although coming home was the right thing to do, Naaman must regain the trust and respect of his wife who, in his absence, has learned to trust God like never before. Could it be that their prior years together have simply been a preface to a greater love than they have ever known?

A Marriage of the Heart by Kelly Long

Abigail Kauffman is looking for a way out; Joseph Lambert is seeking a way in. Since her mother's death, Abby has lived alone with her father and longs to escape the emptiness of the farmhouse that has never felt like home. Joseph Lambert is a newcomer in their close-knit community. Only after they find themselves suddenly married to each other do they begin to understand the tender truths of life-long love.

What the Heart Sees by Kathleen Fuller

When Ellie Chupp loses her sight in an accident--and then her boyfriend shortly after that--she believes love will never be in her future. But Christopher Miller has returned home, five years after fleeing from the tragedy that broke his heart. When Ellie and Chris meet again, sparks fly. Could true love be a matter of seeing with new eyes?
Posted by arayasunshine20 at 2:16 PM No comments: 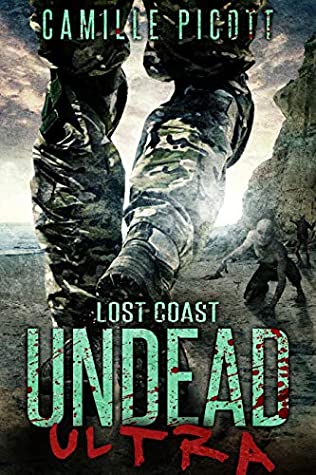 I love this series to date, the author really goes into detail but not overly so that you find yourself skipping over passages. This is the third one in the series and they really give you a run for your money ;) pun intended.

Kate has changed a lot in each book, you get to see/read/hear how each thing affects her.

The book follow Kate again as well as a soldier name Ban. I will say that while it was interesting hearing things from Ben, I am more into Kate's chapters xD.

Ben really likes Kate which he speaks about in his inner monologues but he is really crud at expressing anything to her. Along with Kate and her training with the others, Ben helps everyone learn how to shoot guns.

There are some very shocking scenes you wouldn't see coming but still can bring your emotions to the extremes.

I was given a free audiobook on the Authors Direct app. This review is my thanks to the author for a great read that I really enjoyed. These are my thoughts on the book.

What if zombies evolved … and organized?

Out of the ashes of the zombie apocalypse, Kate and her small band of survivors have created a life and become a family. They train together, scavenge together, and survive together.

Their comfortable routine is interrupted by a frantic distress call. When Kate forms a rescue mission, she and her people find themselves faced with the unthinkable: evolved “alpha” zombies capable of organizing hordes of the undead.

Even worse, the alphas are on the move--and they’re headed straight for the university where the survivors have made their home.

Can Kate and her people outwit the alpha zombies and save their home? Or will they become part of the undead horde?

Posted by arayasunshine20 at 1:08 AM No comments: