It is coming onto cold season so I thought I would post this for all to know, and remember. 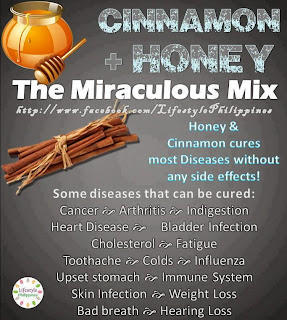 Drug companies won't like this one getting around. Facts on Honey and Cinnamon:

It is found that a mix of honey and Cinnamon helps relieve symptoms of a lot of diseases. Honey is produced in most of the countries of the world. Scientists of today also note honey as very effective medicine for all kinds of diseases. Honey can be used without side effects which is also a plus.Today's science says that even though honey is sweet, when it is taken in the right dosage as a medicine, it does not harm even diabetic patients. Researched by western scientists:

HEART DISEASES: Make a paste of honey and cinnamon powder, put it on toast instead of jelly and jam and eat it regularly for breakfast. It reduces the cholesterol and could potentially save one from heart attack. Also, even if you have already had an attack studies show you could be kept miles away from the next attack. Regular use of cinnamon honey strengthens the heart beat. In America and Canada, various nursing homes have treated patients successfully and have found that as one ages the arteries and veins lose their flexibility and get clogged; honey and cinnamon revitalize the arteries and the veins.

ARTHRITIS: Arthritis patients can benefit by taking one cup of hot water with two tablespoons of honey and one small teaspoon of cinnamon powder. When taken daily even chronic arthritis can be cured. In a recent research conducted at the Copenhagen University, it was found that when the doctors treated their patients with a mixture of one tablespoon Honey and half teaspoon Cinnamon powder before breakfast, they found that within a week (out of the 200 people so treated) practically 73 patients were totally relieved of pain -- and within a month, most all the patients who could not walk or move around because of arthritis now started walking without pain.

BLADDER INFECTIONS: Take two tablespoons of cinnamon powder and one teaspoon of honey in a glass of lukewarm water and drink it. It destroys the germs in the bladder....who knew?

CHOLESTEROL: Two tablespoons of honey and three teaspoons of Cinnamon Powder mixed in 16 ounces of tea water given to a cholesterol patient was found to reduce the level of cholesterol in the blood by 10 percent within two hours. As mentioned for arthritic patients, when taken three times a day, any chronic cholesterol-could be cured. According to information received in the said Journal, pure honey taken with food daily relieves complaints of cholesterol.

COLDS: Those suffering from common or severe colds should take one tablespoon lukewarm honey with 1/4 spoon cinnamon powder daily for three days. This process will cure most chronic cough, cold, and, clear the sinuses, and it's delicious too! 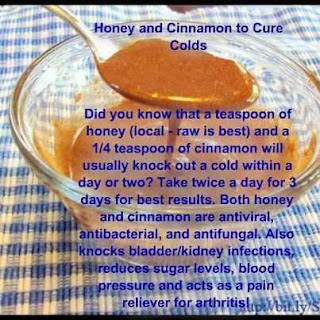 GAS: According to the studies done in India and Japan, it is revealed that when Honey is taken with cinnamon powder the stomach is relieved of gas.

INDIGESTION: Cinnamon powder sprinkled on two tablespoons of honey taken before food is eaten relieves acidity and digests the heaviest of meals

INFLUENZA: A scientist in Spain has proved that honey contains a natural 'Ingredient' which kills the influenza germs and saves the patient from flu.

LONGEVITY: Tea made with honey and cinnamon powder, when taken regularly, arrests the ravages of old age. Use four teaspoons of honey, one teaspoon of cinnamon powder, and three cups of boiling water to make a tea. Drink 1/4 cup, three to four times a day. It keeps the skin fresh and soft and arrests old age. Life spans increase and even a 100 year old will start performing the chores of a 20-year-old.

RASPY OR SORE THROAT: When throat has a tickle or is raspy, take one tablespoon of honey and sip until gone. Repeat every three hours until throat is without symptoms.

PIMPLES: Three tablespoons of honey and one teaspoon of cinnamon powder paste. Apply this paste on the pimples before sleeping and wash it off the next morning with warm water. When done daily for two weeks, it removes all pimples from the root.

SKIN INFECTIONS: Applying honey and cinnamon powder in equal parts on the affected parts cures eczema, ringworm and all types of skin Infections.

WEIGHT LOSS: Daily in the morning one half hour before breakfast and on an empty stomach, and at night before sleeping, drink honey and cinnamon powder boiled in one cup of water. When taken regularly, it reduces the weight of even the most obese person. Also, drinking this mixture regularly does not allow the fat to accumulate in the body even though the person may eat a high calorie diet.

CANCER: Recent research in Japan and Australia has revealed that advanced cancer of the stomach and bones have been cured successfully. Patients suffering from these kinds of cancer should daily take one tablespoon of honey with one teaspoon of cinnamon powder three times a day for one month.

FATIGUE: Recent studies have shown that the sugar content of honey is more helpful rather than being detrimental to the strength of the body. Senior citizens who take honey and cinnamon powder in equal parts are more alert and flexible. Dr. Milton, who has done research, says that a half tablespoon of honey taken in a glass of water and sprinkled with cinnamon powder, even when the vitality of the body starts to decrease, when taken daily after brushing and in the afternoon at about 3:00 P.M., the vitality of the body increases within a week.

BAD BREATH: People of South America, gargle with one teaspoon of honey and cinnamon powder mixed in hot water first thing in the morning so their breath stays fresh throughout the day.

Remember when we were kids? We had toast with real butter and cinnamon sprinkled on it!

According to the Mayo Clinic: "However, due to the risk of infant botulism, a rare but serious form of food poisoning, never give honey to a child younger than age 1." see http://www.mayoclinic.com/health/honey/AN01799

Never heat over 104 degrees as that will kill enzymatic action of the raw honey. 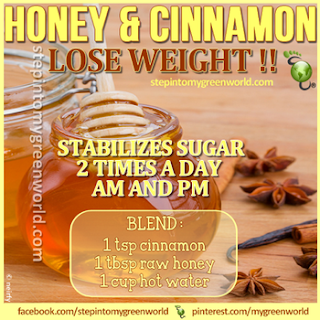 
Posted by arayasunshine20 at 5:23 PM No comments:

Melt butter in a medium saucepan over medium heat. Stir in brown sugar and milk. Bring to a boil and boil for 2 minutes, stirring frequently. Remove from heat. Stir in peanut butter and vanilla. Pour over confectioners' sugar in a large mixing bowl. Beat until smooth; pour into an 8x8 inch dish. Chill until firm and cut into squares.

Remove from heat; stir in marshmallow creme until well incorporated and melted. Stir in peanut butter and vanilla until smooth; spread in prepared pan. Let cool before cutting into squares. PREP 10 mins COOK 10 mins READY IN 50 mins
Posted by arayasunshine20 at 9:42 AM No comments:

A couple nights I started re-reading a book called Swipe. I love this story and I am always thinking about it at the most random of times.

It is a great book. It does have religion in it, though that is just fine with me, it goes in this book very nicely. Just the first sentence of the prologue draws me in. "The moon was the color of blood, and the clouds moving past were pale like bone."

Logan lives in Spokie and he is turning 13 this year and he knows he should be happy he is getting his Mark but when his older sister. Lily, had went to get her mark five years ago she died. He also feels like he is being watched, there are signs that are showing up as he gets closer to his 13th birthday.

Mr. Arbitor and his daughter Erin are moving to Spokie. Her dad works for DOME (Department of Marked Emergencies) in the city of Beacon. She goes to see her new school and finds it is interesting the way the halls are named after their views. Examples are "Amazon Wing" has a view of a rain forest from long ago, "Sahara Wing" has a view of dunes of northern Africa, and there are a few more you would like reading about.

Logan best friend is Dane who is turning 13 very soon. Dane is a singer in a band, and he cant wait to pledge for his Mark so he can start getting paid and be able to buy things.

The book also starts to talk about Hailey (who has her mark) and who Dane likes, but she had told him she liked Logan, before he got a chance to tell her he liked her.

Logan grandmother always starts to talk about how she hates having the mark and if she could get rid of it she would. She starts talking like this when it comes time for Logan to get his mark, and she did it when Lily was going to get her mark.


Hop you read this story and like it as much as I do.

Posted by arayasunshine20 at 6:05 PM No comments:

I made some homemade lip gloss. For those interested in how to do this, I will let you know what I do. It is very easy and only requires 2 ingredients. Vaseline and crayons, yes I did say crayons. :) Crayons are non-toxic so it is safe that way, but i wouldn't try it near your eyes.

Ok so to start this off you will need a glass container, sticks to stir, Vaseline, crayons of the color you want the gloss to be, and a microwave. You will also need something to put the gloss in when you are done, I usually use pill containers for this.

Place about a little more than a teaspoon of Vaseline into the glass jar. Cut up half of the crayon of your choice into small pieces and put into the Vaseline.

Pour the liquid into your choice of container you want the gloss in and let it sit, to harden. Then enjoy your homemade lip-gloss. 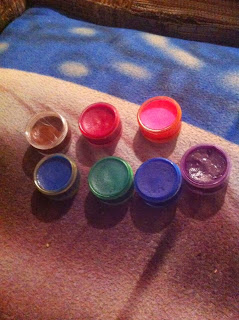 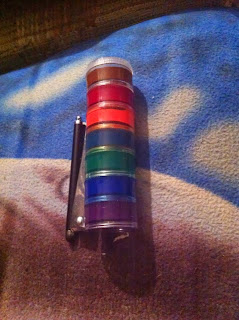 Posted by arayasunshine20 at 11:44 PM No comments:

Labels: Do It Yourself

So I am now going to be trying to use my blog more often than I have been, so I am going to try and post more. Hopefully a few time a week.

Here is some info I haven't posted. My name is Raya Whitehouse, I am 28, turning 29 November 2nd. I have a husband of 4 years named Dave (though we have been together for 15 years. And I have a daughter named Cassie.

I love to draw animals, though I am not good at humans at all. I love to read, I read all kinds of different novels, including teen fiction. I like playing games on my iPhone 4 and facebook.

We have 2 male dogs. Lucky, he is a brown and white, medium size, Shih-tzu/Poodle. He is now 3 years old last May. We also have Jersey who isn't really ours but my mother-in-laws, but we watch all the time. He is a small black miniature poodle. He is about 6 months old now.

We have 3 cats, 2 male and 1 female. 2 are fixed. The one male and female are siblings and have been fixed, named Stormy and Angel, they are about 7 years old now. The other male is my daughter's cat Oscar. He is a year old now.

So today is Sunday and my daughter has her friend over. She likes to having a friend with her all the time so there is someone her own age to be with. She had the friend over night last night and they stayed up till 12:25 before they went to sleep and had me wake them today at 9:30am.