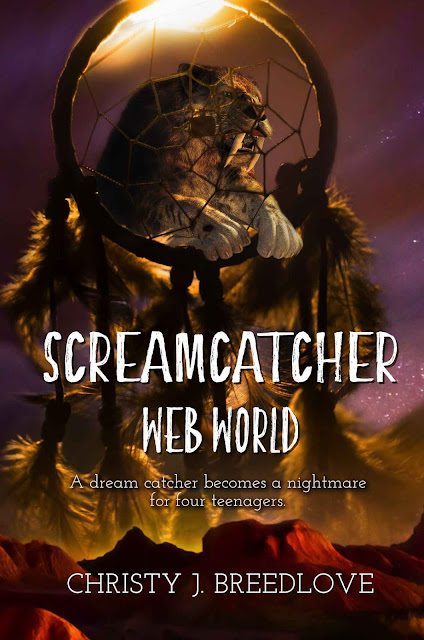 I received this book free from the author and will be giving a small rundown and an honest review on what I thought of it.

Jorlene (Jory) Pike and Choice Daniels are the people you meet right off the bat, and they greet you with some humor, in this encounter that you get to witness. As they talk in the first chapter you will see a build into what direction the story will be heading into, Nightmares.

Jory has /nightmares all the time that it takes her ages to fall asleep. Jory's grandfather (Albert White Feather Pike) has tried to give her some old herbal remedies like wild black cherry tea to try to help her through it, but nothing has worked.

Jory resorts to using a dream catcher from her grandfathers shop after being tag teamed with her Grandfather and Choice telling her to at least try it out cause it couldn't hurt. Choice and her grandfather make a deal in another room after she agreed to try it. If you wish to know about the deal (which in my opinion is why things with this precise dream catcher went wrong) you will just have to go read this epic tale yourself.

Jory and her 3 sleepover companions are dragged into the Nightmare-ish world. In this place there is one twist and turn after another that they have to deal with.

Personally i found this book to be a page turner, something I didn't want to put down until the end. There were so many twists and turns that it keeps you on the edge trying to guess what is going to be around that next corner (page). I really enjoyed this book, and will be looking forward to any others that may follow.

From the Back Cover

When seventeen-year-old Jory Pike cannot shake the hellish nightmares of her parent's death, she turns to an old family heirloom, a dream catcher. Even though she's half blood Chippewa,Jory thinks old Indian lore is so yesterday, but she's willing to give it a try.However, the dream catcher has had its fill of nightmares from an ancient and violent past.After a sleepover party and during one of Jory's most horrific dream episodes, the dream catcher explodes, sucking Jory and her three friends in to its own world of trapped nightmares--a place where there's no color or electricity, the houses are derelict, and the streets are filled with murderers and thieves.

They are now trapped in the web world,where every nightmare and evil spirit has been kept in quarantine, and these spirit beasts will stop at nothing to halt Jory and her friend's passage through the realm. Jory leads her friends through the web maze, following the clues of her ancestors. She'll have to decipher the strange footprints, path markers, and a mysterious riddle. It all leads to the burning light that sears a hole through the middle of the earth.But is that the tunnel of light where people really go when they die? Or is it the Indian light of salvation--the circle of life--the hole in the web? She soon discovers that she is the key and that none of her friends can escape this u-side-down world unless she summons the courage to make the first step.
Posted by arayasunshine20 at 7:17 PM