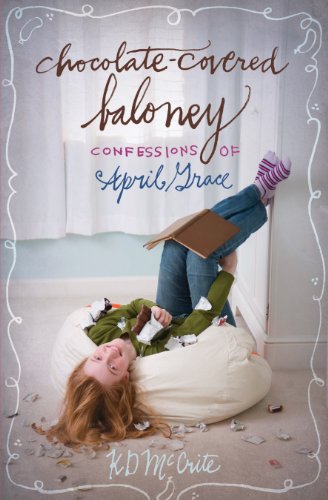 
Third book in the series.
I didnt get a chance to read the first 2 books in this series but i found you don't really need to, to get what is going on. This is a great story. This story could just happen and has happened to others, so reading it like this with such a good ending is great too. I would recommend this to teens and adults, i think that the problems in this book are pretty well relate-able to a lot of people.

It is about a family of two sisters and a baby brother. The oldest (Myra Sue) is into acting and now is being very secretive. The younger sister (April Grace) wants to know what is going on and tries to snoop, though it doesn't really work. When she figures it out it is too late. I won't say much more than that as it will ruin the ending and it is a great ending to read after all that happened in the book.

The Book Description
The last thing April Grace wants is more change in her life—but that’s exactly what she gets! Plus, April has a new mystery to solve when Myra Sue starts sneaking around and acting very suspicious!
From snooty new neighbors to starting junior high to getting a new baby brother to having her grandmother get a boyfriend, April Grace has had enough change to last until she is at least 87 years old.
But when it rains, it pours, and April Grace is in for the ride of her life when her prissy, citified neighbor Isabel becomes her gym teacher and a long-lost relative suddenly reappears and throws everything into a tizzy. On top of that, April’s sister, Myra Sue, has been hiding something and sneaking around. April needs to find out what is going on before her silly sister gets herself into trouble again. More important, will April find the grace she needs to handle her topsy-turvy life and forgive past wrongs?
Girls will fall in love with April’s humor and completely relate to her as she deals with family, friends, drama, and both the humor and the heartache that are part of growing up.
Posted by arayasunshine20 at 12:19 PM