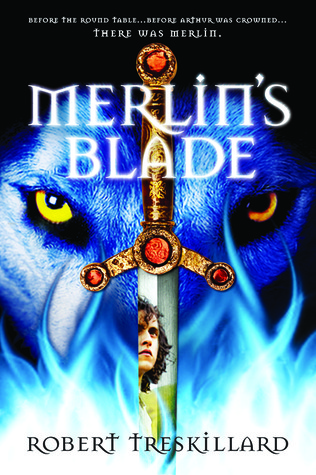 By Robert Treskillard
Published by Zondervan

I first thought to pick this book, because pretty much everyone knows the name Merlin. So I thought this would be a great read, to see what this could be about him as a child, and not the most famous part of his life as an adult. I was not disappointed, it was very detailed writing and of course I really love the cover. This is a great book to choose to read, so please do so.

I will be looking forward to reading the other books in the series: Merlin's Shadow & Merlin's Nightmare

Merlin is a half-blind boy (wounded in a wolf attack years ago). He has a lot of courage and tries to do the right thing. He offers up prayers when he is whipped. He has a friend name Garth, who has done a wrong thing in the beginning of the book, it is right after a fight they have with two other boys.

While he is in some woods with his friend they see two people, though Merlin can't really see much, they see a flash of light that comes from some kind of stone.

Merlin is attacked in his own home by a wolf (but there was more outside of the home), which his sister calls her friend. His sister, Ganieda, says the wolf was her friend and she was only protecting herself. Merlin is taken in as a bard by the king. We find that he possess a wisdom and courage that no one knew he had.

Info on the book's character's (mostly for my own information)