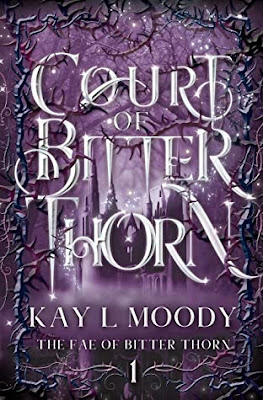 I was given an ARC and I loved every minute of it, I read it all through and could wait to finish it. This book has many twists in it and each one keeps you on your toes as you read through the adventures that Elora has.

The book follows Elora and her journey at the age of 17 and being betrothed. Elora didn't believe in Faerie, she thought that it was all a tall tale. Brannick needs helps and makes her an agreement, which she doesn't know that she would be forced to keep once she agreed fully, thinking it was just a joke she agrees to a certain terms (which you can read about). She finds out it was not a joke and isn't happy about it when she pretty much gets dragged to in to Faerie.

I hope to read the next installment when it comes out as I have loved this story right to the end, curious on what will happen in the next book.

Faerie wasn’t supposed to be real.

Tricked by a fae prince, Elora is stuck in the Faerie realm far from her young sisters who depend on her for survival. Under the terms of her bargain, she can’t go home to the mortal world until Prince Brannick becomes the next High King.

Or until he’s taken out of the running…

Sabotaging Brannick’s chance at the crown will be much faster than helping him win. The fae prince may be charming, powerful, and wickedly handsome, but that won’t stop Elora from selling his secrets to the highest bidder.

By day, she uses her master sword skills to train the prince, while ignoring her growing attraction to him. By night, she conspires with a rival king in a nearby court whose plans could destroy half of Faerie.

If she gets caught, Brannick will kill her. But what’s life without a little bit of danger?