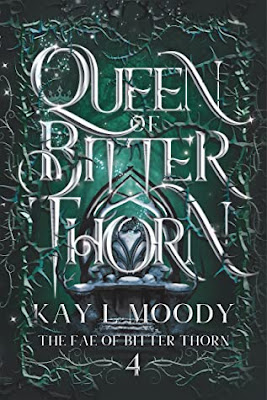 I loved this book! This is the last book in the series and it continues Elora's journey in Faerie.

The Queen Alessandra has made it so everyone can feel the "bad" human emotions when Faerie was not used to feeling it and not in such high doses. They feel such dispair and sadness that is causes pain. This coupled with Brannick and his own past issues with the Queen Alessandra makes things so much worse for them.

This was a great book to end on and while I was sorry to see it end, the ending was quite interesting.

Faerie itself is on the brink of destruction.

Alone and frightened, Elora must return to Bitter Thorn to share news of Queen Alessandra’s most recent victory. But the realm is crumbling before her eyes. Frost covers surfaces it should not. Defensive enchantments are not as strong as they should be.

Everyone in Faerie is falling prey to the Fairfrost queen’s manipulation.

Though Elora’s magic sometimes works, she still has no idea how or why. At every turn, Ansel impedes their progress and feeds the fear they can’t escape. Fairfrost Palace is now heavily guarded, which makes it nearly impossible for them to face Queen Alessandra.

To restore Prince Brannick to his rightful place as High King, Elora must learn to trust herself.