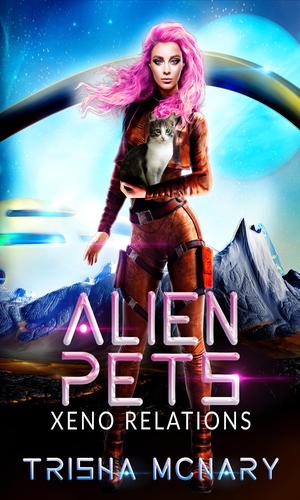 Some of this will have small spoilers (nothing to ruin the reading of it, or spoil anything in a major way, mostly some bits of info that are kind of intriguing to me.

So let me start off with a very tiny spoiler, which is in the first chapter, and can be read within. So we all know how a cat will choose the human that it wants as its owner. You will buy a cat, bring it home but no matter if you love it to bits, it just might choose another in the household to be with over you. In this book it is a similar concept in which the cat actually chooses what alien (called Verdantes) they want for their human to be a pet to, at least in the case of the human girl named Antaska and her cat Potat.

Potat chooses (and allows) the Verdante named M.Hoyvil be her new pet and the owner of her other pet Antaska. You will get to read her point of view at times, and M.Hoyvil as well as Antaska.

Everything about this book drew me in, the great cover art, the interesting title, and the blurb that was written. There are different perspectives that you get to read about from the different character, each one separated by an alien head so you know that the focus is shifting.

Humans can live to be an average of 200 years old and if you are 50 you are classed as a young adult. Verdantes live to the age of 5,000 or more and if your 650 or so you are allowed to choose your first pet and are an adolescence. (Antaska is just over 50 and M.Hoyvil is 650).

Life gets weird when you’re adopted by an alien.

One million years in the future, young human Antaska and her psychic cat are adopted as pets by a gigantic alien. Traveling in outer space, she becomes telepathic in a world where that’s dangerous. Then she gets into a love triangle that’s even more dangerous. Her cat tries to tell Antaska what she’s doing wrong, but will she listen?