Ice Crown (The Elements of Kamdaria 1) 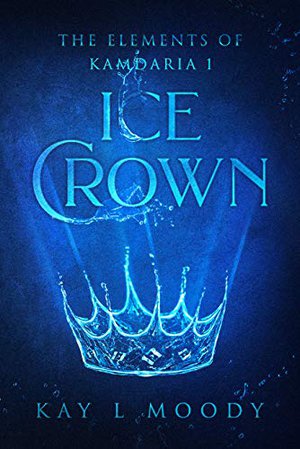 This book is a very fast read. It doesn't linger in areas, and in fact there is more that I would have liked to see, like training updates instead of just "10 years later". It follows Talise who is from the poorest area called the Storm and whom has never has seen one that can bend elements, especially like she can.

Talise can leave the Storm forever, is after the 10 years of training her element manipulations she wins the final competition to work for the emperor. She has Marmie who is her loved one that pushed her forward to this training and to try to win her own way out of the storm, but there will be no way out for Marmie herself. In the final year (year 10) all the schools gather their last class and puts them together, that is where Talise meets Aaden. One who might just beat her out of the competition if she is not careful. She sees a trick that Aaden has up his sleeve which is very impressive, so she has to think of way to out do that trick or else she won't have a hope of winning in her mind. Does she risk it to try and win, or does she just give up and go home to Marmie.

There is one twist that I won't say much about, but it's big and could impact what happens.

I loved this book from start to end, I wish there was more in the area where she was training, maybe show some struggles she had to overcome to get to the point she is at after the 10 years, but other than that, I thoroughly enjoyed reading it.

Can't wait for the second book in the series.

The competition could save her life... but only if she wins.

Talise can manipulate the elements with ease; water, air, earth, and fire all bend to her will. As a citizen of the Storm—a crime-laden land where death is the only constant—her only chance for a better life is to become Master Shaper.

A competition for the position takes place at the end of her training years. If she wins, she would live in the palace, work for the emperor, and escape her inevitable death in the Storm. But she’s not the only one with a chance to win.

Aaden is another talented student. As a citizen of the Crown, he was born with unlimited privilege and resources. When someone from the Crown wants to win, they do. End of story. And his shaping is unlike anything Talise has ever seen.

Complicating matters, Talise’s loved one in the Storm gives her reason to abandon the competition altogether, forcing her to make an impossible choice.

Torn between duty and freedom, she must learn that clinging to the past, might destroy her future.

For fans of Red Queen, the Grishaverse, and Avatar the Last Airbender, this desperate fantasy world has elemental magic and tension you could cut with a knife.