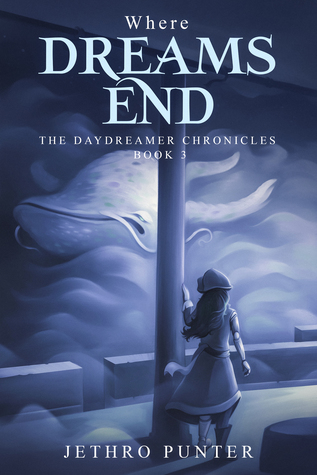 This book continues the adventures that Adam has had with his friends Lucid and Grimble. He knows where his mother is located, now all he has to do is try to figure out a way to make it to that area and rescue her, which will not be easy. Their first obstacle is to try and find a boat that is strong enough to make it across the Dwam and a captain who would be willing to take the risk and drive the boat there. The place where all nightmares come from. Adam gets pick-pocketed while looking for a specific captain and loses what money he was given and his pendant.

Back in the waking world, the real life struggles continue for Adam. Getting on the bad side of Miss Grudge, doing detention, telling Nora and Charlie about what has been going on within the dream world Reverie, sleeping in the spare room of the Henson's place.

I won't say too much more, but I will say that while it is great if you read the books before this to catch up on what's going on, it doesn't exactly need to be done, but it would be better to read them all. The book is well written as usual with nothing lingering too long on the scenes, it is descriptive without being overly so.

I received a free copy of this book via Booksprout and am giving it an honest review of what I thought of it.

Finally, Adam has found where his mum could be hidden....

She is somewhere deep within the Dream World of Reverie, but getting to her won't be easy.

For a start she is somewhere far on the other side of the world, a place where no sane person would ever choose to go, the place the Nightmares come from. Even worse than that, the Queen of the Nightmares has her own plans in place, and Adam is caught right in the middle of her schemes.

Then there is the small matter of a war between Nightmare factions, an impossible voyage across the great sea of dreams and clashes with the most ancient beings in all of Reverie.

Fortunately for Adam he has the help of an even odder group of friends than usual, which in Reverie means very odd indeed. But even with the help of friendly dream beings, Nightmare freedom fighters and clockwork cyborgs, this time Adam is in real trouble, stuck in the place where dreams end.

'Where Dreams End' is the third book in the Daydreamer Chronicles series.