Me and my daughter, Cassie. Went to the library yesterday and I went and picked up a random book from the new section (which just means it is new to the library, it doesn't mean a new release, as this is the case in this book).

The book is called Wicked Lovely by Melissa Marr and it is the first book of at least 5. I started reading it yesterday while I was still at the library and got very interested and was able to find the second book as well (Ink Exchange). 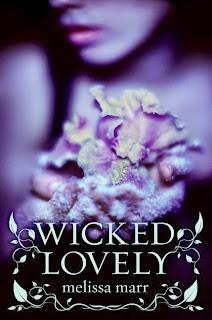 I am almost half way through the book now and I am still not interested in putting the book down. This book really draws you in and leaves you wanting to finish it to see what is going to happen around the next page.

It is about a girl name Aislinn who has a gift to see fairies, but she is never to let them know she can. Her mom and grandmother had to do the same thing. Ignore the fairies, pretend they aren't there and don't attract their attention. Now she has attracted the attention Kennan, who is a King, and she is not sure why he is looking her way.

Aislinn best friend Seth, she finally revealed to him that she can see fairies and he is researching ways that he can help her (and maybe even gain the sight himself so he can continue to save her. Seth gives her the idea of changing her ways, so that maybe the the fairies would go away and leave her alone again.

Kennan is the Summer King who is looking for his Summer Queen. He looks time and again and offers the girl he picks a choice. Pick up the staff and hopefully be his Queen (but with that comes a risk of taking in a cold that you never get rid of until he can get another to touch the staff. Or to not touch the staff (it didn't really tell much here but I believe it said something about being a follow-along girl, who are called his Summer girls.

The last girl Donia has been waiting for someone to take it for a while now, centuries. Her job is to talk the new girl(s) out of taking the staff. It is all part of the game they have to play, each has their own roles to follow the rules by.

I think everyone will definitely like this book, it is very imaginative.

That is the last I will say of this awesome book, now it is time for me to go back and read this, cause I had a hard time to put it down so I could type this up.